Christmas is the culminating point of the Wischik culinary year. Weeks beforehand the preparations have already begun, with the pickling of the sledzi and the souring of the beetroot juice. But before we look into the culinary framework of the holiday, let us recall the historical roots of the celebration.

At its heart, the Wischik Christmas is a Polish Christmas, and a number of old Polish traditions are kept. We sit down to the Christmas Eve dinner at dusk, at the moment the first star appears. First, a consecrated wafer is divided among everybody and greetings are exchanged.

But there are many other traditions, some brought each year by guests from far away, others invented on the spur of the moment. There is a saying: 'A legend, a lie, and a likelihood make a tradition'. And so the first course is 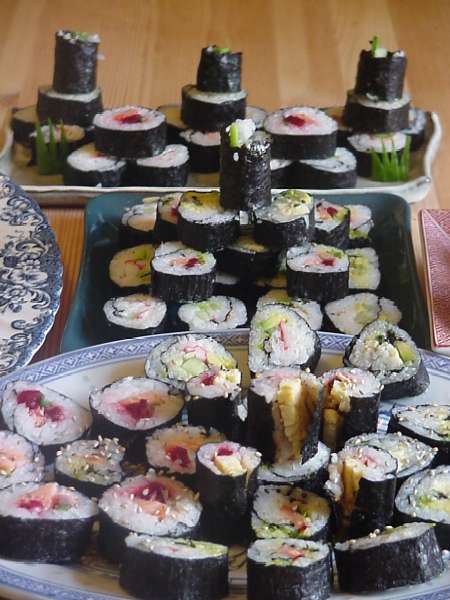 During this course is held the ritual wasabi contest. Wasabi is a powerful Japanese spice, much stronger than mustard. The fieriest-mouthed guest and the most foolhardy compete to see who can eat the most in one mouthful, while denying flatly that there is any competition between them.

The next course is part Polish but pure Wischik. It consists of rounds of sledzi (a type of pickled herring) on rye bread, with vodka. The vodka must be kept freezing cold, because otherwise it tastes horrible.

Sledzi
Each person in turn proposes a toast to a saint. Everyone tosses back a glass of vodka, shudders, and then eats the herring to get rid of the taste. The proposer tells a story and explains why he or she chose that saint. When there are twelve or more guests, this can take a lot of vodka.

The next dish is an example of good traditional Polish cooking. It seems very plain at first glance, but thanks to the croquettes it becomes original and attractive. But it is very filling and rather heavy, and it is falling out of favour, our appetites unfortunately not matching up to those of our ancestors.

Bigos with mushrooms and nut croquettes

No Polish meal would be complete without beetroot, and borsch is the pride of old Polish cooking. There is a special version of this soup for Christmas eve, from which all the ingredients are removed. It is drunk from cups, and delicate mushroom pastries are dunked in. These pastries take so long to make that some members of the family go away for a whole day to avoid joining in, but they are well worth it.

By this point people are beginning to wonder if they will ever see a main course, let alone the dessert. And there is no answer for them yet, because now it is time for some games and presents.

Poached salmon
There are always lots of different vegetable and salad dishes, varying from year to year. One traditional accompaniment is capsicum, peeled and cut into strips, then slowly cooked and tossed in butter.

Now it is time for the promenade course. Everyone wraps up warmly and we stroll to the ocean to sing Christmas carols. Normally only one of us knows the lyrics, and a different one can sing in tune, but we do not allow this to cramp our style.

Back in the warm, and it is time for the most eagerly awaited dish of them all. The first dessert, the Pavlova. This is made with lots of sugar, lots of cream, and lots of exotic fruit, and it was introduced to us by Louise from Australia. It is eaten in silence, each eager to eat as quickly as possible and be served more. The record consumption by one person is three quarters of a Pavlova in one sitting.

There follow at least five more courses of desserts and cakes and biscuits. Or at least there would, if anyone had any room for more food. But by this point, most people can only appreciate the food visually. 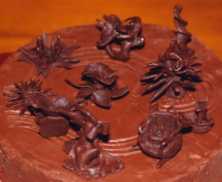 In fact, one year there was a delightful cake, decorated on top with fantasy figures moulded out of chocolate. Eating it would have been too much, so it was passed from hand to hand, and each person in turn elaborated a story woven around the figures. This Story Cake course has since become a tradition.

At midnight, midnight mass. Our local parish priest was introduced to sledzi and vodka toasts the first time he shared our Christmas meal, and after a very interesting sermon he decided to be more cautious next year! And so we are left, sitting around the fire, sipping cocktails, and starting to think about the traditional English Christmas lunch we will eat tomorrow...

This advent calendar is really an edible ginger-bread flat house. At the start of December we bake the ginger bread, cut it into twenty-four house-piece sized pieces, and gather together all the icings, hundreds and thousands, glace fruit, ball-bearings, colours, sweets, chocolate flakes and licorice that we can find. Then we invite friends over and cook them and eat them. No, that's not right! We all decorate the cake together. There is a Christmas picture behind each day.